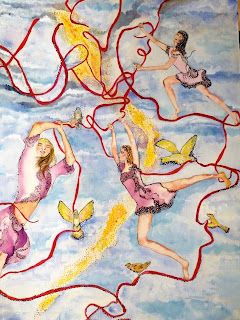 A Cord of Three Strands

At first they thought it was all about them,
(an understandable mistake). And in fact,
it IS about them but not ALL about them.
They are secondary to what IT is about.
They thought their commitment, their cares,
concerns, worries, struggles, hopes, dreams,
frustrations….(those things),
could be surmounted by the
presence and power of each other.
After all, they are strong women.
As for uniqueness, their separate and
combined individualities are the stuff
of legends. And such legends….
but these women have
pledged to remind each other of the
origin of their legends, the progression,
the doubling back, the sharp curves,
the inconsistencies and themes.
Whether their legends
will be passed on for ill or for good is
a conversation that often absorbs them.
The turning point in these still to be
lived legends was the day they realized
it wasn’t all about them. At core, IT
is about The Cord of Three Strands,
a cord which is theirs to grasp, not to construct.
With this mystery in mind, they subsequently
and alternately launch each other in the
direction of The 3 stranded cord, urge
each other in maintaining a firm grip.
Some days maintaining a grip is
more difficult than others. This is where
the birds come in. The birds give witness
to the presence of The Three
Stranded cord and It’s ever present provision.
On this day of storm and thunder, the women
cling to the 3 stranded cord. The clouds part.
The light appears. The women are not straining,
but clinging, in so doing, yanking back the clouds
and basking in the light that is not their own.