The setting sun flanked by conical clouds looks like melting candy corn and for a moment looks like becomes is. Of course, it’s not candy corn. She knows this but does she know this?

She’s told that the sun is an enormous fire. She believes it is an enormous fire because it comes out with the heat of the day. Or when it’s cold, not at all. But perhaps relying on others for proof that the sun is a fire and not an enormous piece of candy corn infused with dry ice is like relying on others to explain God as a Father and expect to be comforted. For this moment, she will maintain her own opinion. She will declare the sun as candy corn infused with dry ice. And God will say “What an amazing mind you have.” And she will allow the inadequate description of Father to pertain to God..

I woke up thinking about broken flowers and the Bill Murray movie, “Broken Flowers”. When I woke I realized the broken flowers signified women. Obviously. A broken flower is an impossible thing. A flower is not glass. It thrives or dies. The broken flower puts in mind a tender thing varnished to protect its tender construction. Bill Murray was not broken but empty. Broken is better than empty. His (character’s) only moment of passion happens when he suspected he might have fathered a child; when he pursued the boy he pursued the possibility of breaking and life spilling into himself. I’m sure the broken flower also refers to the hyman. But that is obvious. Numb is not good. Numb means something doesn’t work. Something shuts down, circulation is impaired. Impaired circulation leads to disease. Appendages can snap off. A toe is a tiny thing but once it snaps off you miss it. Missing fingers are just as bad as missing noses. Missing ears are an inconvenience; for lack of an ear, glasses sit askew. Once an appendage snaps off, odds are it won’t be snapping back on. Also, I found it tragic to study a man who cares about a homeless, hungry boy but has to explain that he likes girls.  Maybe he should have said something like this, “I like girls to like me. I don’t really like girls. I just think they are pretty. Like flowers. When I bump into a girl, I break her. Don’t walk behind me barefoot, you’ll hurt yourself on the trail of broken flowers.”

I look at you.
You look at me.
I look at me looking at you.
I think thoughts.
Think words.
Thoughts that fly about like litter.
Words that stay small like seeds.
Do I pick them up?
Do I plant them?
Is it already too late?

The wind catches the unsaid from the wires of my mind.
The furrowed soil suckles them in.
This frightens you.
It frightens me.
We are both frightened in the silence,
in the grip of what’s left unsaid,
fear comes in and makes a rash suggestion,
dig a trench, bury everything you want to say but cannot bear, die, fear says.

But please, I beg you. Do not listen.

This is not about my real life, the one I live on ordinary days. This is about that one, the one just around the corner. The corner I am continually peeking around. I am getting better at sneaking up on it. It does exist after all. It’s more than real it is alive. The reason I say it is not about my real life is because I have gone so long limping on the definition. I have confused real for larger. My larger life makes peanuts of the real. My larger life is what I am pressed to pursue but it has already caught me. I am learning to breathe in its grasp. I am more grateful than I was last week. Last week the real was choking out the larger. The real is a stop sign but the larger is a trampoline. I can bounce into it and out of it and not bother with the wind of the real. My larger life is one I am growing into now that I am less afraid of being big. I say Less but I don’t say Not. I talk alot to myself. I admit questions about things I used to pretend to know. Pretending is real. Questions are large. One question leads to another and they have friends and constituents. Questions have springs and special launching devices for slinging me into large territories beyond what I supposed to be real. Real should not be trusted when it slams the door on large. And it will you know. Bam. Sometimes the echo lingers. Questions are the handle. I keep yanking and so should you. 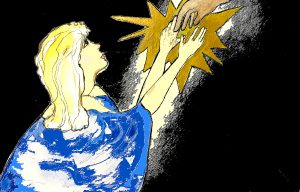 I think my difficulty in coming to Jesus in prayer, and when I say Jesus I mean also The Father and the Holy Spirit, has to do with mistaken identity. Not only my own but God’s identity is hidden from me. To give an almost comic example – and one I often reflect is the allegory taken from a short story called “Three Lessons from the Amazonian Jungle.”

Renato, a character in Pamuel Houston’s book, Waltzing the Cat, tells an interesting story that speaks to this phenomenon of misunderstanding. “Monarch butterflies make blue jays throw up. That is how monarch butterflies keep from being eaten. But over the years, by a process known as Batesian mimicry, several other butterfly species have learned how to color themselves to look like the monarch every time a blue jay comes around. The problem arises when a blue jay’s first experience is with an impostor butterfly. If the blue jay doesn’t throw up that first time, he will spend the rest of his life not knowing which are the safe butterflies and which are the ones that will make him sick.”

I relate to this confusion. I often mistake my experience with others for my relationship with God. I have experienced meaningful, profound, and truthful times of healing with others. It’s a rare thing requiring time and risk. I’m usually behaving with civility. Clearly, I am limited and flawed. The urge to gussy up the truth tempts me. But God knows more about who I am than I do. Going to God, the God of Abraham, Issac and Jacob, going to Jesus, God in human form – fully God and fully human, I am received for who I am. It is safe for me to own my inability to change. I get a glimpse of God’s mercy. How humbling to experience God’s love! How do I show appreciation? How do I love enough? It’s impossible. But I am transformed when I dwell on His promises and believe the miracle of being adopted as His child.