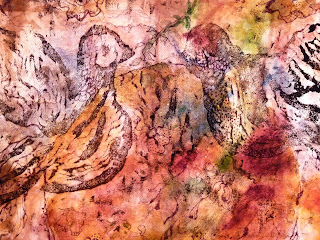 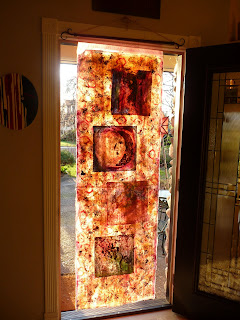 Here I have taken four pieces of birch, carved
away the negative space to reveal the images
signifying a Season of Rain, a Season of Moon,
a Season of Promise and a Season of Bloom. After
rolling the carvings with ink and stamping them
onto a paper called kozo, I embellished the
printed designs with hand applied ink and watercolor.
The bees are the result of myriad stampings of
one small carving of a bee. The paper was then
married to several layers of toile and sealed with
three pounds of beeswax.
In the Battle of the Books by Jonathan Swift,
wherein an argument ensues between the spider and the
bee, Swift describes the bees as follows:
“These bees have chosen to fill their hive with honey
and wax thus furnishing mankind with the two noblest
of things, sweetness and light.”
In terms of dedication, pursuit, protection,
trust, desire and longing, we are all married to
something or someone. Unless the bee is married
to the flower it’s wealth of honey is never realized.
And yet, it takes two million bees to make a
pound of honey. Rather than enlist assistance by
by making heroic statements the honeybee does a
dance. Her language essentially hangs on the
alphabet of dance. Dancer or not, wouldn’t it
be lovely to use our bodies to bear such a
message of goodness and light as to evoke healing
music to be orchestrated in others?