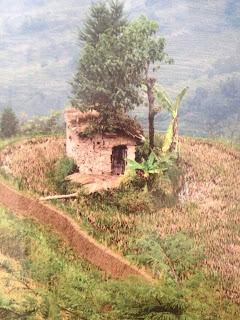 What’s not in the picture is Mother. But she’s here just beyond the rise. We know this by the circular tracks. Mother doesn’t like backing up. She’s often said so. To make sure we all got it, she looped the house in a dirt drive and managed the weeds by gunning the engine of the old black Ford. When she and dad fought, she’d hop in the Ford and take it for a spin. Their circular rants became habitual.

Even when Dad was gone, she’d hop in behind the wheel and gun the engine. Next thing she knew she’d be moving with simulated progress. But her forward momentum curved back on itself the minute it threatened to carve a new track. Once she wearied, we’d hear her skid to a halt and the protest of the emergency brake.

Nothing grew where the tires spun. That suited us kids because we’d already ran out of water hose. Her daily jaunts around the driveway kept her occupied, preventing her from sticking any more plants in the ground. Even so, you need to know Mother like we know Mother. Once you hear the story about the tree she planted on the roof, you’ll know Mother.

The idea evolved on the day the old car died and Mother kept living; a hot day. Every garden hose had a job. The white pine she bought on sale at WalMart in the 5-gal tub was busting its tin seams. Mother glared at that hot roof. She knew she could toss a pot of water up there with the muscles she’d developed yanking on that brake, so she went for it. After gathering a load of dirt, she hauled it up a ladder, one rung at a time, and planted that pine. That’s Mother. We think she’s brilliant and now you know she’s brilliant too.